Asmodron Member Posts: 3,145 @@ - Legendary Achaean
April 2019 edited April 2019 in North of Thera
To collaborate all the events, musings, theories, shouts, changes, and so forth occurring in the third black wave, i've made this thread.
What has happened so far:
- Fragments around the world turned out to be from the boundary stones keeping the Tsol'teth back.
- Barrier broken, Tsol'teth back.
- All cities now have a shield around them to keep the black tide back.
- Tsol'teth crusaded and sucked up the essence from all god shrines...except Twilight and Deucalion (suspiiiicious).
- Avatar raised for Tlalaiad.
- An unknown ally apparently assisted the Tsol'teth.
As for the event, i've so far loved it. Excited to see where this goes.
I'll post future shouts, happenings and discussions as needed later.
Tagged: 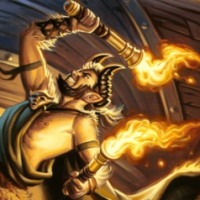