Sarapis Member, Administrator Posts: 3,404 Achaean staff
March 2015 in North of Thera
So I'm working on a release for the client that'll come after an upcoming client release, and I want to graphically show some of the most common defenses/states. What I'm working with right now is the below (there's also a female version). What I want to know is if you guys think I'm prioritizing the list of defences I can show here, as I definitely can't show them all. By design, they're all defences that are available to everyone rather than being class-specific (maybe in the future).

Here are the ones I've got here:

So, are there common defenses I'm missing that should be prioritized above one of these? 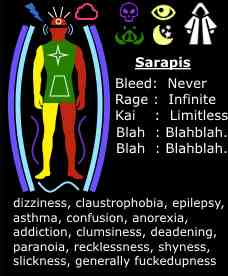