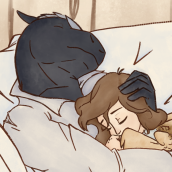 I've been trying to learn Runewarden two-handed combat and build a system of triggers and keybindings around abilities, but I need some help. I've been reading through the forums, asking around in a couple clans in game, and trying my best to apply what I get there to my systems and approaches. However, it seems like no matter what class I step into the arena to face off against, I keep getting wrecked in one-on-ones and I can't really tell where I'm flubbing up. I'm really starting to feel like I'm being a nuisance dragging folks in just to get exasperated, frustrated, and not making any headway, and while I try not to let that show, it's been getting worse lately. Sorry to the few of you that've seen that.

That said, if there's anything glaringly wrong you guys can see of my assessment below or any advice you can offer, I'd be really grateful.

To start with, I'm gonna cover what all I do know and some of the trouble I'm running into right now. Any insight you guys can provide is highly appreciated.


The basic flow of my fight, or my tactics as I attempt them, is as follows:


As of right now... I get to step five, get constantly locked by paralysis, have to spam my hit keys which fills mudlet with "frustratingly your muscles refuse to cooperate" or whatever the paralysis line is, I can't tell what hits I actually do get in, and then I have to back out of the room. If I'm lucky, I'm back to step 5 and stepping back into the room. If I'm not, I'm back to step 3. If I'm really unlucky, I'm at the spectator stands.

Any insight is really appreciated at this point. I enjoy the "feel" of two-hander and the theory behind its combat, but it's slowly becoming something that's really frustrating and draining dealing with.
Tagged:
0
«12»