Chubbs
October 2020 edited October 2020 in Tech Support
I started rewriting my defup/keepup package and it somehow turned into this. Package has some holes, but figured I'd put it out there if anyone wants to take it and have a go. You need to have CURING DEFENCES ON for this package to work. It makes use of the 'curing priority defence <defence> <prio>' command to work.
You get one defup and one keepup configuration per class/elemental/dragon. When you swap to another class, you start out with a blank defup/keepup configuration. All of your configurations are saved on a qq trigger and keepup is disabled on qq.
Package makes a visual display of defences that you can click on to add/remove them from defup/keepup. Once setup is done, click away then turn on the defup/keepup.
Can download package from here: https://github.com/Fangalorian/Nexus-Defup-Keepup/archive/main.zip
After you import the reflex package, you need to do 'def load' before anything will work.
Doing 'defs' will bring up the package's commands, displaying the following: (Images that go along with this are in spoilers) 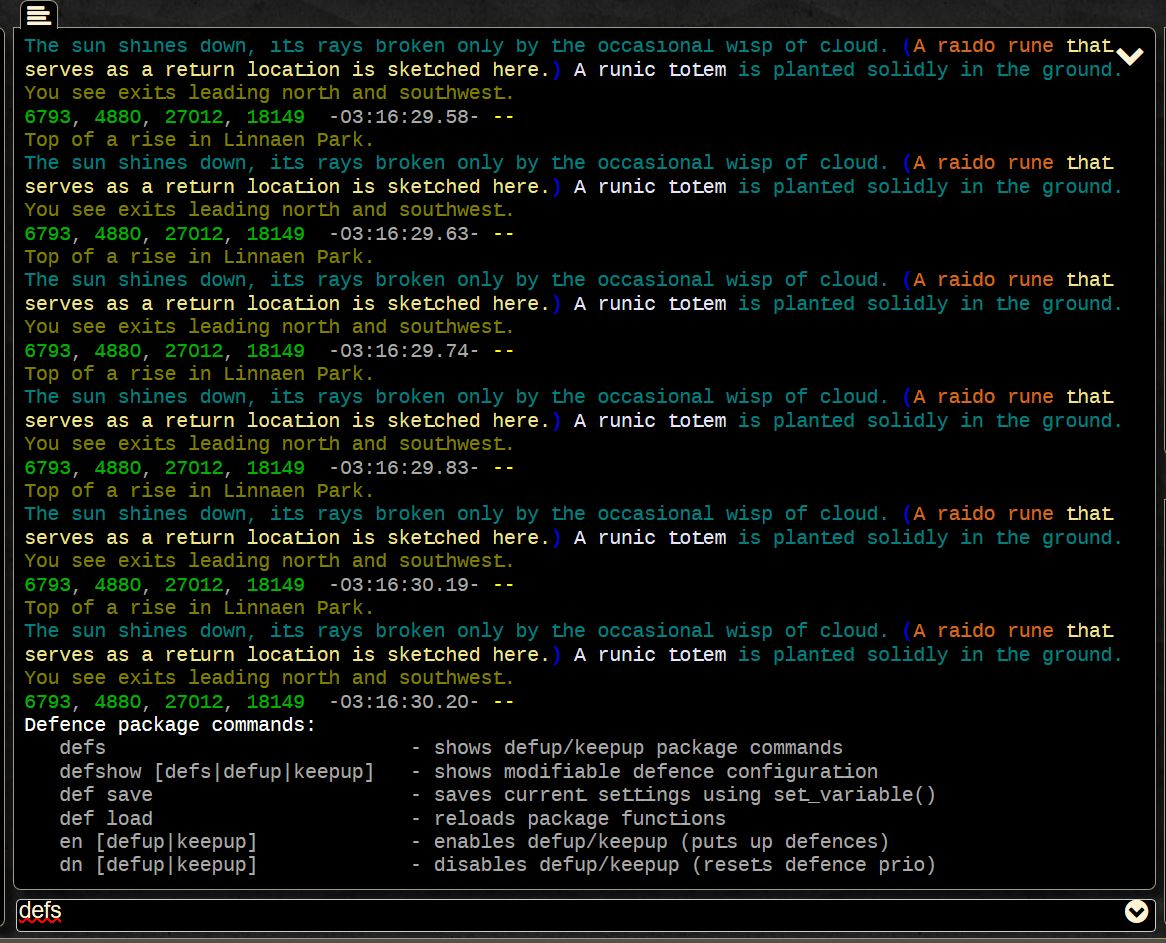 The 'defshow defup' and 'defshow keepup' commands will bring up a defences display that shows what your current defup/keepup configurations are. 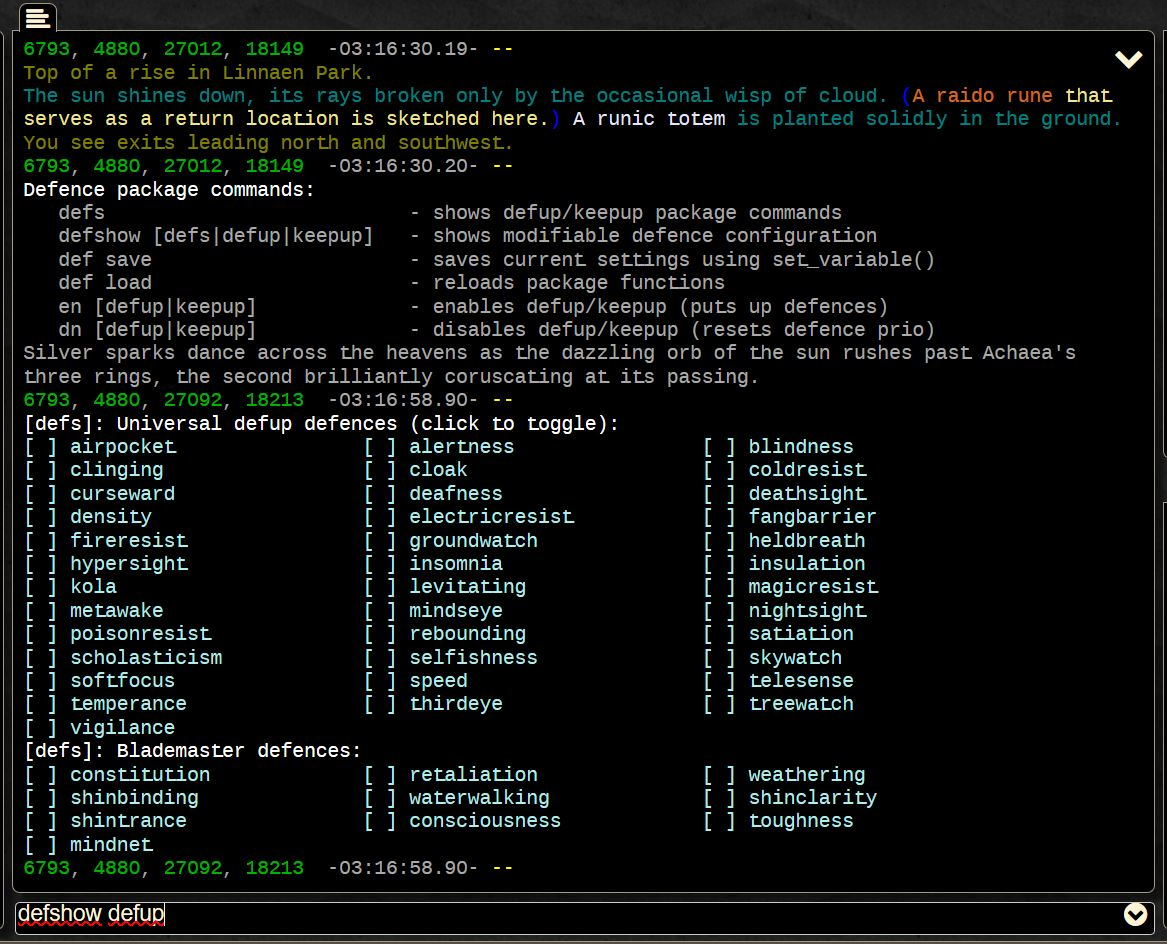 You can click the defences' names to add/remove them from your defup/keepup list. When you click, an updated version of the display will be outputted to the screen. 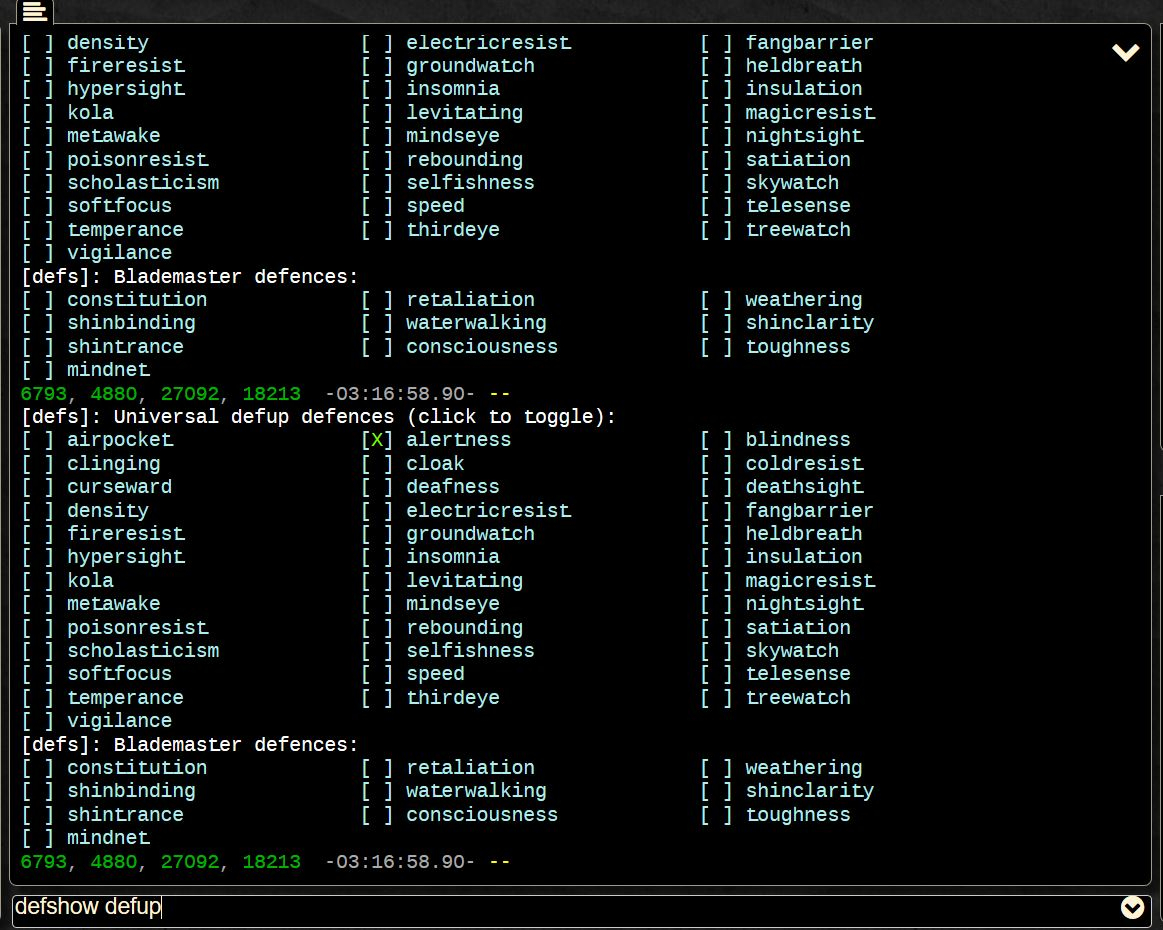 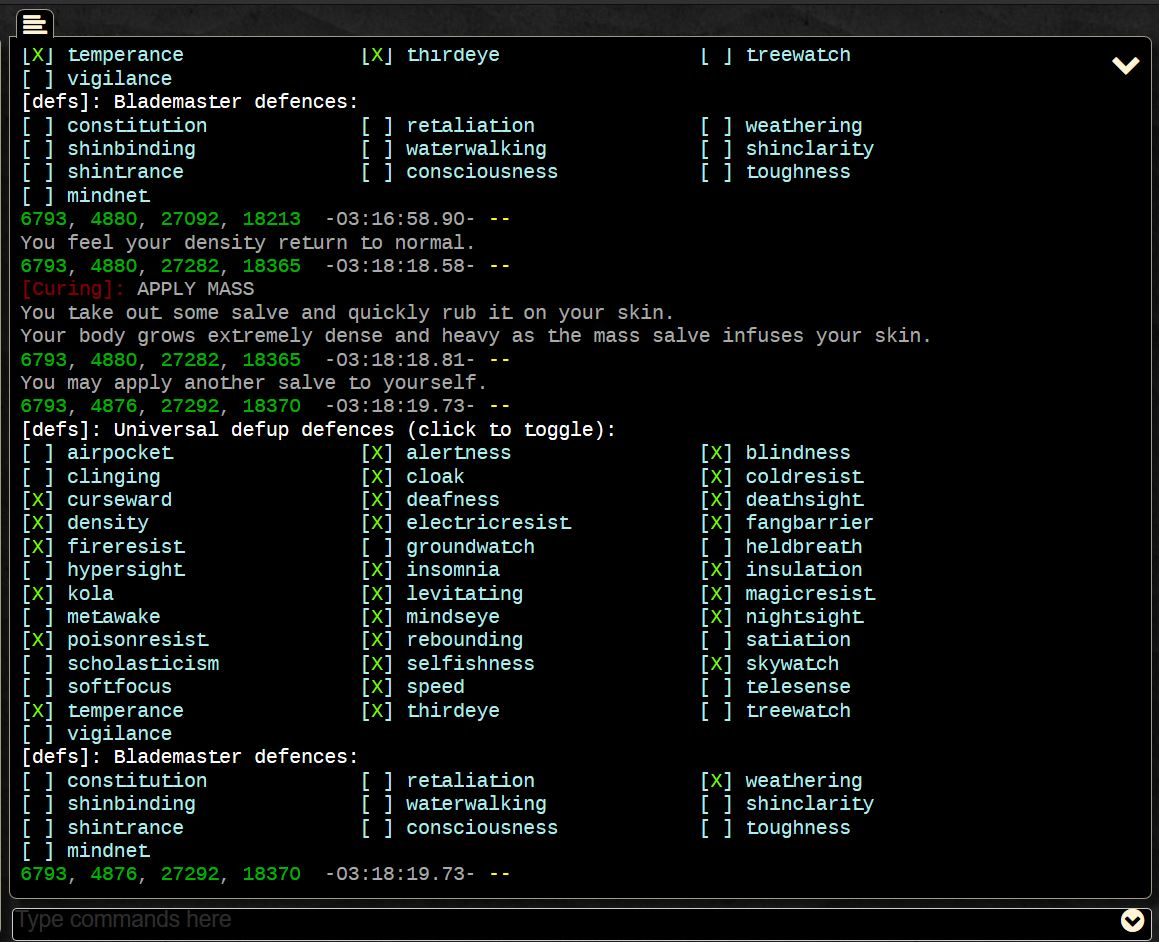 As mentioned before, this isn't fully implemented. I only have Runewarden, Blademaster, Dragon, and Earth Lord, so those are the only classes who have any class specific defences implemented. All other classes don't have those put in yet.
To add those defences to the display, navigate to the 'Defence Management' Nexus Function inside the package.

Then scroll down to 'class_defs' object and add the desired defences into the proper class' array. The Blademaster, Runewarden, Jester, Dragon, and Earth Lord arrays can serve as examples. Please keep in mind that you have to insert the name that GMCP and the 'curing priority defence <defence> <prio>' command would use for the defence into the array as the defup/keepup handling is done by through use of the previously specified command. 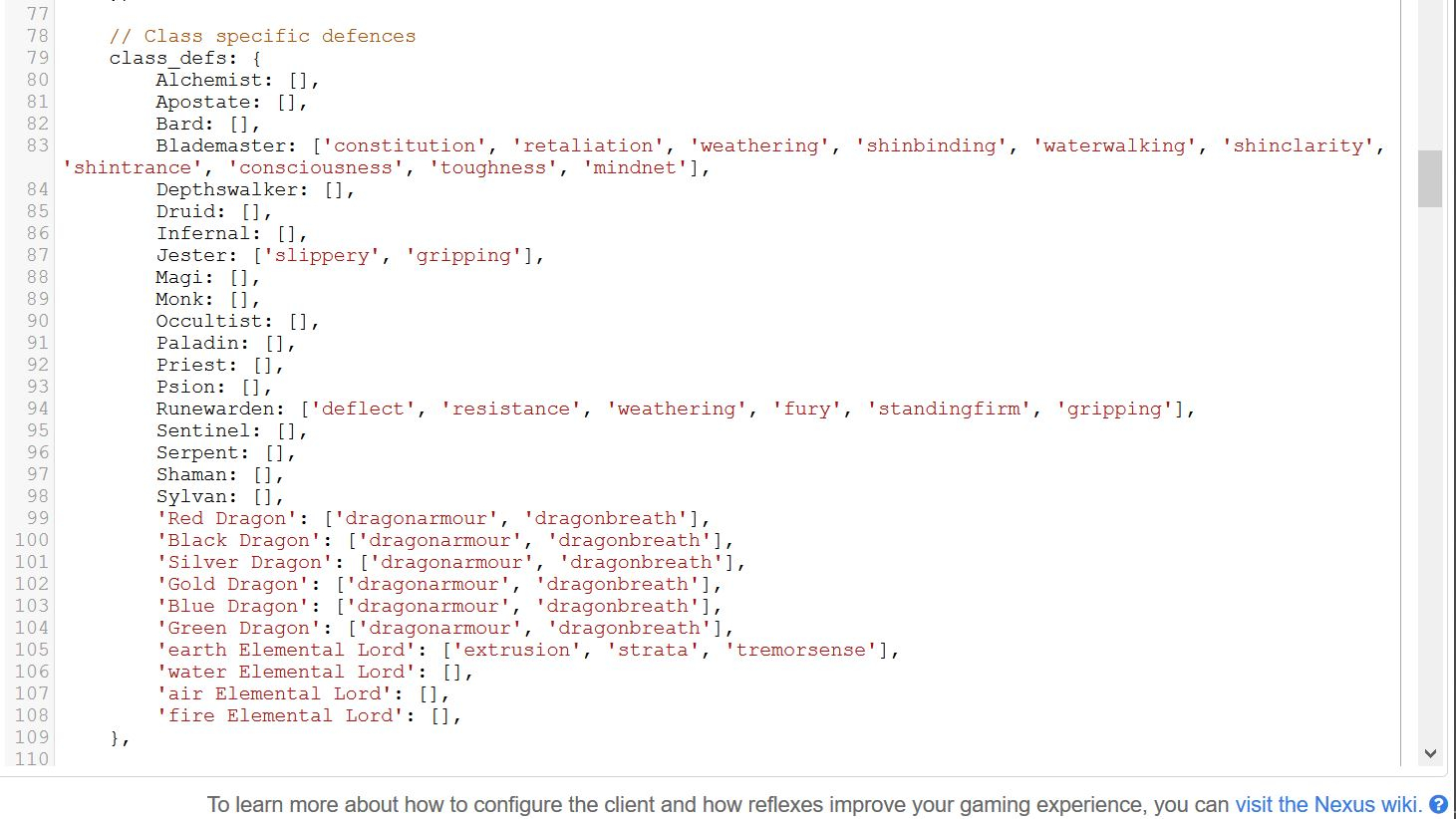 After modifying the appropriate arrays in the 'class_defs' object, scroll all the way down, hit the save button, then back in the main game window, do 'def load' to reload the package and make your changes go through/apply.
If you use it, have fun. Let me know how fast it breaks. If you send me a filled out defence array for a class in the next while, I'll put it in the package and update the download link. Not gonna do any github collaboration because I'm trash at version control.

ETA: You may also have to add triggers under the 'Form Changing' group for other elemental lords/elder dragon morph/etc. Dunno what those look like, but you just need the trigger line. The body will look like all the other triggers in that group. Added a few more things at the top too.
Also, yes, the display was based off the 2018 version of svof's defence thing.