This month we help international players, we warn about deprecation of the semicolon, ease up exporting a package, speedwalk through non-English games, and bring lots of bugfixes to you.

Also, in case you’re not on Twitter, we’re working on setting up a Patreon!

Mudlet works for Windows users like Iksiński, Müller, and 张三

Linux and macOS load Mudlet fine, even on computers where the user’s name is not written in plain English. Unfortunately, Windows had issues with these usernames, and many Mudlet players worldwide noticed. They can finally rejoice now as vadi2 has fixed the problem:

With this, we’re another step ahead on our road to Mudlet 4.0 which is all about bringing the joy of text gaming to everyone in the world, regardless of their name or culture.

it’s summer outside; can you feel it?

Unfortunately, with the command separator set to; as default in Mudlet right now, sending the above line isn’t easy! Mudlet would break up winky faces and legitimate use of the semicolon character. New players have to adjust it in preferences first.

This will change soon!

Starting with version 3.23 next month, Mudlet will let all new profiles only separate the commands if double semicolon ;; is written. This will help to avoid the pain, while still allowing you to use the command separator if needed.

What if your scripts make use of expandAlias() and thus rely on ; to work? Well, our first recommendation is to never use expandAlias, use functions instead – not only because of this very problem.

expandAlias() is also much slower than creating a function and calling them directly, so consider removing it. You can find help in building your Lua functions in Mudlet’s community in our forums or Discord chat for example.

If you really need expandAlias() for good reasons, we’ve added getCommandSeparator() for you since version 3.18 from March – Now, instead of hardcoding the separator to ; you can specifically use the separator which your player has chosen. Remember, everyone can change it in their Mudlet preferences.

Will there also be a setCommandSeparator() function, then? No, because adding this would just recreate the problem and even intensify it: You’d then have different packages each change the separator for the entire profile, as they see fit, which would make players unhappy.

We are still experimenting on the best functionality for Mudlet’s tool to export all your necessary triggers, alias, scripts, and maybe even other pictures, sounds, etc. into a package to share with other players.

Recent improvements by SlySven and Kebap include a bugfix, so you can now also include a whole folder of arbitrary files into your package. This would silently fail until now. In the future you will always see a success or failure message after the export has completed.

You will also always see the filename of the package and the location you have chosen to export to. Furthermore, Mudlet will present a clickable link to the folder. This way you can easily grab the exported package and continue working with it as you see fit.

Remember there is a long list of packages available which have been uploaded to our forums in recent years by other players just like you. Maybe you can find something interesting for your game there as well?

As we’re working through translating Mudlet into many languages, Kebap has been improving the quality of many texts a lot which the translators (and you!) get to read.

Help us to translate Mudlet into your language

When you created a new profile, entered the server/port, connected to it and then went back to the connection window – you’d find that the profile had forgotten the information. Entering it again would make it actually save.

Now, it will save the first time. Like it should.

Pressing the ↓ key didn’t work for scrolling the code editor. It would indeed move the cursor down, but you would not be able to see it anymore. It would vanish into the invisible realms beyond.

This is now fixed! The code editor will again stay focused on your work.

You remember that you can get Mudlet to talk to you, right? We reinstated this functionality with Mudlet 3.17 in February. Imagine making a trigger to say something! Read parts from the game or announce your own texts. Get started here.

You can now let Mudlet speak on Linux, too. Just like in macOS and Windows.

Are you building a Mudlet mapper for a game that doesn’t use English directions? We’ve added a new function for you: translateTable() will translate a table of ‘ne, e, se, sw’ directions to the player’s chosen interface language. Try it out and give us feedback.

Want to have a peek at how much work went into this release? See below: 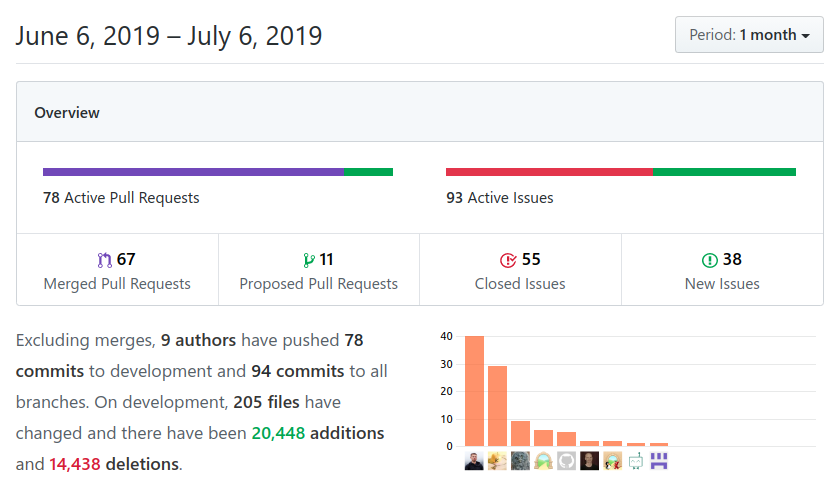