Vaniel
February 2018 edited February 2018 in Tech Support
The Basics to Coding!
Recently I've been helping a few people out that have been putting in an honest attempt to learn like me, and the Mudlet LUA guide is super intimidating if you're just trying to learn the basics. I figured I'd make a small post that anyone can add to that is just the basics. Nothing super advanced, but a way for the building blocks to come out of the box and get all sorted! 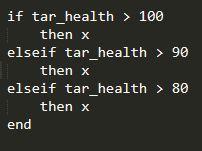