Brenex
April 2018 edited April 2018 in The Scarlattan Theatre
I just wanted to share my submission for the current set of bardics being run as it is the beginning story for my character. This is my first real piece of fiction and roleplaying so keep that in mind when reading. Overall, I'm very happy with how it turned out. I'm starting to sketch out a rough outline of how I want to proceed from here with respect to learning more about who I am; very exciting stuff!

If there is one thing I would have added it would have been more detail although I found myself going back and forth between how much to add that wasn't there, getting it wrong, or detail overload in general. I also didn't want to run in to creating specifics for denizens since I wasn't sure if people would have an issue with what denizens should or in the past have served as some of the roles I introduce below.

The evening’s air was crisp and there was a cool breeze blowing through the leaves of the nearby trees of the Aureliana forest; trees that seemed alive with insidious intent. The stygian night cast no shadows but one couldn’t help but feel a sense of malevolence behind things not seen in the furthest reaches of one’s vision. There was an unsettling feeling inside Brenex but he was preoccupied with figuring out what he was going to do next. He continued walking along the well-traveled highway towards his destination, the wicked city of Mhaldor, his home.

The purpose of this most recent outing was the same as it always was: in search of answers, answers to questions he wasn’t even sure were clear to him. And like the previous attempts before this one, none were to be found at the Crystal Leaf Inn this night. He came upon a large wooden-framed two-story building covered in aged slate slats with a small stable off to its side appearing much like the establishments he had visited previously. Light bled through its hazy thick-paned windows and the soft strumming of a mandolin could be heard coming from its open wooden door. He approached the entrance, kicked his heels on the frame dislodging gravel and dirt from his calf-high boots, and stepped in from the cool outside.

After giving his eyes a moment to adjust, he found an empty table in the corner near the stone countertop bar on the left. He headed that way passing a small ever-ravenous humgii along the way. The entryway near the bar had a sign nearby that said “Shoppe – Closed for the night.” Turning around he took his seat puling in his obsidian cloak tightly around himself. He surveyed the room and sat with his arms folded on the round wooden table scarred from years of use. A small waxen candle sat in the middle near the end of its life. He sat there for some moments taking in his surroundings.

Some of the patrons were sitting around tables laughing raucously among themselves. On a stand nearby was an elegant chessboard with its ebony and ivory-colored pieces adorning it’s top. It seemed to beckon adventurers with promises of victory… or defeat. There were two lean, olive-skinned Tsol'aa sitting arm in arm on the stage, if one could call it that, bathing in the warmth of the hearth. Were they lovers? A bard holding a dark, mahogany mandolin was entertaining a table of grooks taking an exaggerated high step between each of his verses. Staring at the licking fire of the hearth, Brenex started to feel it slowly peel the cold from his skin. He pulled his cloak to the side letting it dangle off the wooden bench. From his seat he could see the staircase leading to the second floor. A dwarf clad in leathers lay sprawled between the upper step and landing seemingly unable to have made it to his suite before being overtaken by sleep. His snoring could faintly be made out between lulls in the clanging, strumming, and laughing that undulated in the common room.

A barmaid wearing a blue strapped white dress approached Brenex with a wooden cup filled with water. “Can I get you anything else? Spicy potato mash? Golden summer’s ale?”

After a pause and with a flick of her wrist to the counter behind her she said, “menu’s on the blackboard.”

With a subtle shake of his head Brenex replied, “I’m actually looking for information.”

“I don’t know how much I’d be able to help with that. I just fill the cups and carry the plates,” she exclaimed with a shrug. She wiped some bread crumbs from the edge of his table before turning towards the kitchen where a cook stirring a cauldron with one hand and waving at her with the other with some ire.

A monk stood on the opposite side of the room. Brenex didn’t remember having seen him there earlier. One of the small grooks took sudden notice of the monk and with a smile quickly stood up and waddled towards him. An exchange of sovereigns occurred for what appeared to be a fortune cookie. The grook clapped happily before taking the cookie in hand and headed back to his table. While sitting and observing, Brenex caught the eye of the barkeep who was leaning over his arms on the stone countertop. Brenex stood, his cloak draping behind him, and moved to the bar leaning on it with his left elbow.

He tilted his head towards the barkeep and said in a low voice, “I’m looking for some information.”

“If it’s a recipe for stewed potatoes or the best way to get ale stains off a counter you’re looking for, I may be able to help. Otherwise, I mostly just listen to the drunks.”

He leaned slightly towards Brenex and added, “as long as they keep paying that is.”

“Have you come across the names Althunis or Ilthanis before?”

The barkeep shook his head. “We get a lot of strangers coming in and out. If you’re looking for records you might want to try Targossas. People say their scholarly pursuits have been inspired by the Gods themselves! Or maybe in the shadows of Hashan,” he added with a sly smile.

Brenex gave him a slight nod and turned to head back to his seat.

The barkeep called out to him one last time saying, “and if you’re looking for a good night’s sleep, the leaf suite is available!”

He sat back on the bench and took a drink from the cup. “Inspired by the gods..” he muttered to himself as he placed his elbows on the table with clasped hands in front of his face. After some time, he realized this trip would not be any more productive than his previous. He got up, dropped some sovereigns on the table, and saw himself out.

Once more he found himself lost in his thoughts while walking along the gravel path of the highway. The subtle smell of spices from the inn mixed with the scent of the Urubamba flora caused him to be reminded of... something. He wasn’t sure of what but it’s a feeling he has gotten many times before. He would describe it like déjà vu but with memories that seem to be just out of one’s reach. It was like looking through a dense fog when trying to remember specific events in his past. Was it a person this time? A place? He wasn’t any surer than the previous times. It wasn’t that he didn’t have any memories of the past as he of course remembered his mother and father and the small farm he was raised on in the eastern fringes of the Northern Plains. It’s just the period when he was a teenager that was shrouded to his mind’s eye.

“Arghh..” Brenex groaned as he fell to one knee on the side of the highway.

Memories. Or was it dreams? Dreams and memories. All that comes are faint images, seemingly impossible to piece together. In one he sees himself leaving his home but… older. Just as fast another appears showing him metal bars as tall as the eye can see. A burning town. A man smiling behind a mask covering half a face. Images of black, shadowy talons rising towards his neck.

Panting, Brenex found himself again in the present. The cool breeze began to pick up again and he rose to his feet. After clearing the beads of sweat from his brow, he once again gathered his cloak around him and continued walking along the path towards his city. 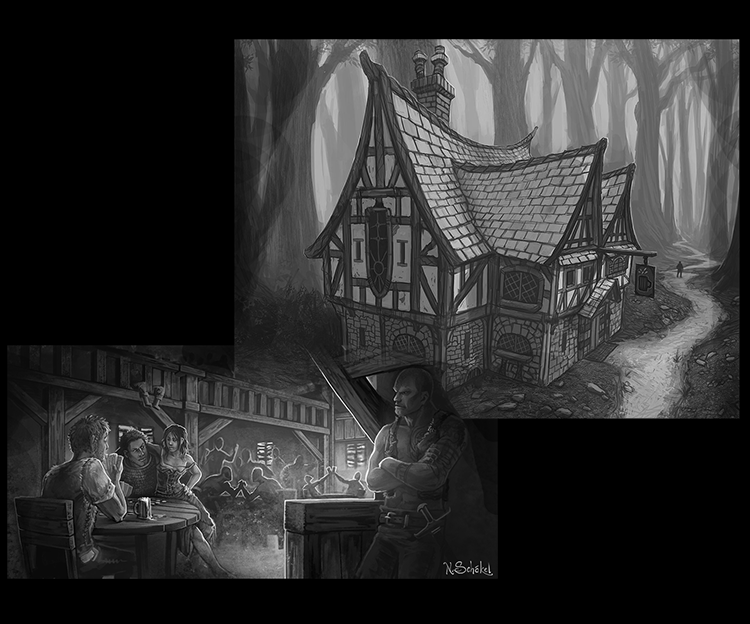